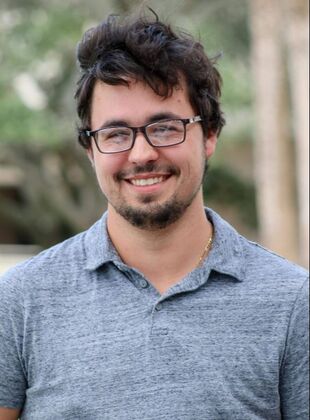 I was born in Nashville but I spent the bulk of my life in central Illinois. I was really brought up in the church so I would have called myself a Christian growing up. As a child, I was in church every Sunday; I did VBS and youth group and I even volunteered in the sound booth running the slides for sermons as I got older. Despite that though, it wouldn’t be until I was much older that I would really be confronted by the gospel. Looking back, I’ve realized that all the time I spent wasn’t really out of worship toward God but was really centered on an idolization of my dad. I would have done whatever I thought would make him the most proud of me.

When I was 16, we moved to southern Florida to stay with my grandparents because my dad had lost his job. I was initially really excited about the move, but after we got here my home life got really complicated. I never doubted the existence of God, but as I spiraled into a deep depression, I was forced to ask, “If God is real, how could He possibly care about me?”

It wasn’t until I was 17, in the midst of that depression, that the gospel was shared with me by a pastor who took the time to sit, pray for me, and cry with me. I had heard stories before, but it was through this interaction that God began to really work in my heart. I was baptized not long after, but no intentional discipleship took place after that. I had no idea how my life was supposed to change. I wasn’t taught how to actually live out my faith.

So I went into college believing in something, but still really living for myself. I got connected to CoMission at orientation, but I spent months dodging phone calls, until finally I agreed to go to a house group thinking that they might leave me alone if I went to something. In John, Jesus says that you will know they are my disciples by the love they have for one another. That love was evident. In them I saw a group of people who treated each other as family and were united around this mission to make disciples. It was through this group of people that I was brought to scripture to see what God is actually like and it was modeled for me what it looks like to follow him.

Over the course of my sophomore and junior years of college, I was challenged more and more to live out my faith and to share it with others. As I stumbled through trying to share the gospel and disciple others in the process, God began to place in me a greater and greater desire to know Him more fully and to make Him known to the world. By the time I got to my senior year, I knew that I wouldn’t use the degree I was pursuing and came on staff with CoMission in a part time position. I finished my B.S. in biology anyway and am now laboring at the USFSP campus full time.

​Every year we see hundreds of students walk onto the campus for the first time and the majority of those students are far from God, not knowing the truth of who He is, what He has accomplished on their behalf, or how that should impact our lives. Unless someone is there, boldly sharing the gospel, those same students will leave after four years in the same state in which they first walked on to the campus. My hope is that gospel driven leaders would be raised up on the campus and then sent out to the nations for the glory of God. I see my life as being fully dedicated to this end.
Soli Deo Gloria.